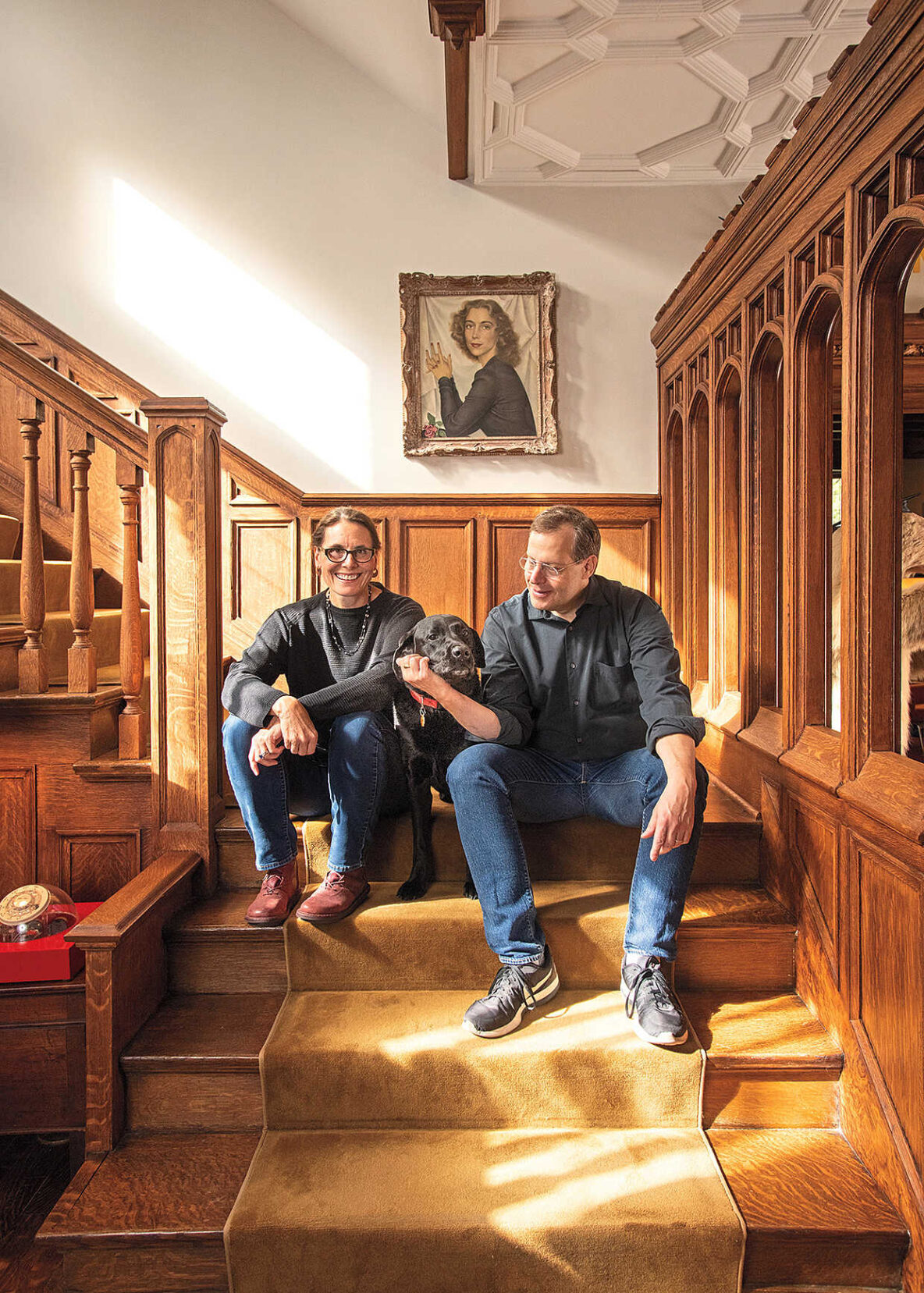 Jay Dandy: We bought the house in June of 2002 and moved in that November. We had been living in a big, Victorian-era house, and this one was equally grand, if not grander. It had soaring 12-foot ceilings.

Melissa Weber: Also, the rooms were very open and square, as opposed to long and narrow, which is typical of Victorian houses. We were really drawn to the spaciousness of the rooms. It felt more livable.

Jay: It’s in the Hyde Park-Kenwood area and was built in 1909 for Arthur G. Leonard, president of the Union Stock Yard & Transit Co. We found newspapers from ’09 stuffed in the walls. In the 1930s or ’40s, it was purchased by the Rev. Clarence H. Cobbs, who was a very well-known minister and the founder of the First Church of Deliverance. He was a South Side fixture. We’re told he lived in this house until the late ’70s.

There are people in the neighborhood who as young kids came to the reverend’s house and had Sunday dinners. [During our renovations], they would stop by, concerned that it was being turned into condos or something. But we assured them, no, we were keeping it a single-family home.

Melissa: Originally, we were going to renovate the entire house at once, but we quickly realized the exterior was one job, and the interior was another job. The first renovation was in 2004, when we did the exterior.

We took out and restored almost all the windows—there are 90 windows, in all. We did a comparison between restoring and replacing, and it ended up that restoring was actually not that much more expensive.

Jay: All the window surrounds were made using cast concrete, which was a marvelous new building material back then. The Robie House, by Frank Lloyd Wright, is just down the street, and it was built at the same time with cast concrete elements.

Unfortunately, if you use cast concrete with metal rebar, it rusts over time. We had to replace 490 pieces of concrete.

Melissa: The masonry was fully repointed, along with a good deal of roof work and parapet work and many other things. We had the leftovers of seven gargoyles on the corners of the house—just a few bits and pieces at the feet. One fun flourish that we allowed ourselves was to have those remade and recast. We did a lot of research in this neighborhood; there are quite a lot of gargoyles here. We also went to the University of Chicago and looked at their gargoyles. And we figured out what kind we liked and then had them made.

We had scaffolding around the house for two years. We tackled the exterior, then took a very long break. In 2012, we started the interior renovation, which took about two years. We closed the first and second floors off completely, except for the kitchen and the family room, then all six of us—we have four kids—moved up to the third floor.

There was 100 years’ worth of wear and tear on the house. Goldberg General Contracting, our contractor for the interiors, went through bit by bit and were completely systematic in bringing everything back as close as it was to the original.

The good thing was that no one had ever really reconfigured the house. The bones were pretty much intact. The floors were in good shape, I think because they were mostly covered in carpet for their lifetime. And the majority of the woodwork was left intact. It was stained with a glossy, dark shellac, but not painted. We refinished all the existing wood. We went back and forth—it was a huge job to strip it all, but finally we decided we should do it. It was worth it in the end.

Jay took a lot of the existing hardware from doors and bookcases—all the screws, hinges, everything—and had them refinished and restored, then put them all back himself. There was a lot of it. There were many trips up to Art Metal Finishers on the North Side, which restored it all. It made a huge difference.

Jay: There’s always stuff that’s exciting when you’re renovating a house. We found a safe in a floor. It was empty, but that was a cool discovery. And we found our living room at one time had been filled all the way around with bookcases, but half of them had been removed. You could see the faint outline of where they were attached to the woodwork.

When we moved in, the second-floor hallway had a dropped ceiling. We found out when [previous owners] were installing the ductwork, they ran it straight down the hallway and dropped the ceiling. We decided to rip it all out, and when [the contractors] took the ceiling down, we discovered we had a beautiful coved plaster ceiling there.

Melissa: I think if Jay and I had lived a different life and hadn’t ended up with two [early-20th-century] homes, we could’ve envisioned living in a midcentury glass house somewhere. That was our ideal. But we’ve found that collecting contemporary art and midcentury furniture was something we really enjoyed, so that’s what we did [instead].

It’s been, I think, a very nice, workable combination. The spaces of our house are very open and square. In that regard, the midcentury furniture feels good in it. It’s very minimal, and the woodwork in the house is neo-Gothic. The two are compatible in a strange way. I think it makes the house a lot more interesting than if it were furnished in the furniture of the period.

It’s a big house. People ask us when we’re going to downsize, which we have no plans to do. It’s a house that really likes people. It’s sort of a hub, and it’s very much enjoyed by friends and family. I’m glad it has a lively existence.