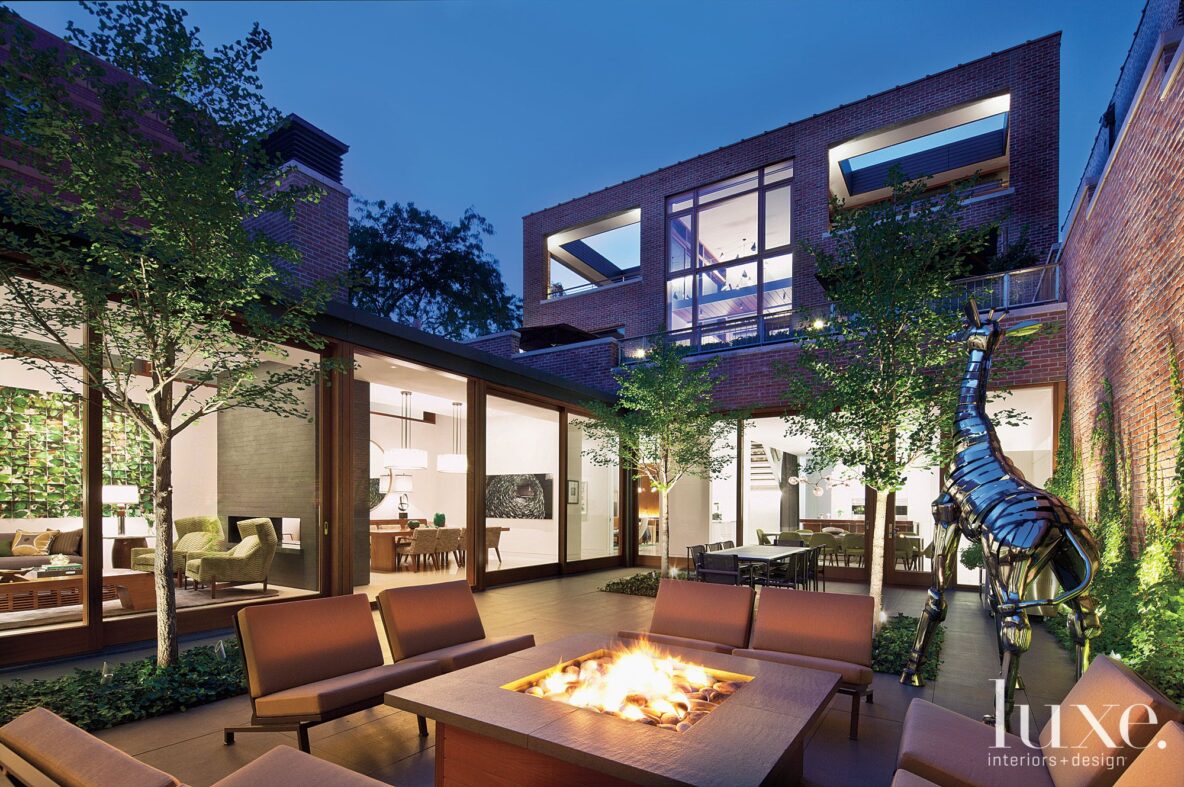 Inner transformation—even of the cataclysmic, life-changing kind—is rarely visible from the outside. People can experience shattering revelations while the person next to them remains none the wiser. This often happens with houses, too, their fac¸ades offering only mute inscrutability about the spaces they conceal. Witness this Lincoln Park residence.

Transformation one: homeowners who decided, after living for years amid traditional surroundings, to explore their modern side. “After having kids, the whole idea of clutter just wasn’t attractive anymore,” says the mother of three, ages 6 to 13. “We wanted something clean.”

Chicago’s current setback requirements meant that building something new with the space they desired would ultimately mean ending up with less living area. Transformation two: refashioning a historic circa-1902 dairy building, with a stable out back dating to the 1870s—a remodel realized by the architectural team of John Vinci, Philip Hamp and project architect Daniel Roush. It had functioned as an artist’s studio for decades before falling derelict, and to the naked eye it was a little inauspcious. “Much of the masonry was in such disrepair that it was actually a hazard,” recalls Jeffrey Berry, the general contractor who worked on the project alongside firm owner Jacob Goldberg. “The three floors in the back were literally crumbling.”

However, the building’s exterior walls rose straight up from the lot lines. Translation? An extraordinary 50 by 125 feet of raw space, albeit presenting some difficulties. Hemmed by alleys that could not be blocked, Berry had to “work within the building, underpinning foundations and holding up exterior walls at the same time.”

Inside those walls, the architects designed simple cubic forms around a courtyard that offers outdoor space while creating a light well that naturally illuminates the interiors. “The owners wanted expansive well-lit walls for their artwork,” says Hamp. Landscape architect Mimi McKay then designed a minimal hardscape of Indian black granite, cutting three beds into it and planting gingkos, which, she explains, “will eventually create a ‘ceiling’— offering just enough shade for privacy from taller buildings, but not so dense that it obscures light.”

The architects’ interior palette was simple—terrazzo floors downstairs, sapele wood windows throughout, white walls and more Indian black granite. To add green space, the architects designed upper-floor terraces. The city determined they were too open for the building’s volume, so the terraces had to be given “a sense of enclosure,” which, says Roush, “actually made the project stronger.”

Inside, interior designer Stephanie Wohlner, who had previously devised two residences for the clients, faced the husband’s concerns. “He looked at me like, ‘How can we warm this up a bit?’” she remembers. Transformation three: “I came in with color, texture and layering,” she says.

A green chevron-patterned fabric found on the living room armchairs sets the tone for the general color scheme, which had to be, like the building materials, consistent throughout because of the courtyard. “You see every room from all of the other spaces, so everything needed to connect,” says Wohlner, who carried the fresh green shade throughout, mixing it with neutrals, gray and lots of wood in varying degrees. In the living room, the green armchairs share space with gray sofas and a chunky teak bench and coffee table. In the adjoining dining room, the wood table takes center stage while neutrals on chairs and green in accessories achieve secondary importance. And so on throughout the house.

“I’m pretty well known for my traditional work,” says Wohlner, “but I knew I could do this.” And, surprise…transformation four: “I realized I can really do any look, and may have turned a corner toward modern.”