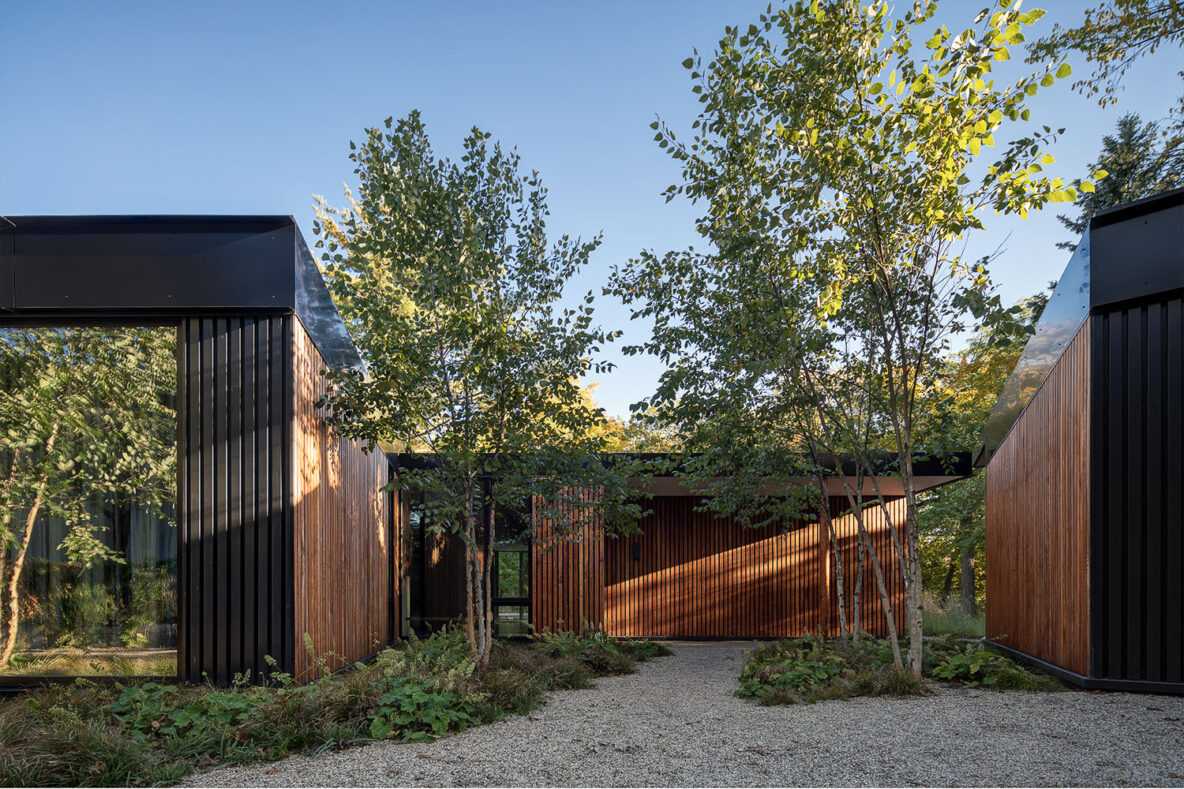 A conservationist and an interior designer created a place that embraces their interests: namely, untamed nature.

As if on cue, a red fox erupts from the ravine and saunters up to the living room. “We know her!” exclaims Bruce Boyd, co-owner of the glass-enclosed home at whose walnut slab dining table we sit. “She’s the one with the crooked tail, right?” inquires Bruce’s wife, interior designer and painter Beth Boyd. We sip our tea in silence as we watch the elegant mammal traipse through the snow, emancipating a colony of goldfinches from the prairie grass into the bare maples. It’s a National Geographic special in glorious view. Every day.

Before they moved here three years ago, the couple had been searching for years for a place along the ravines that lace through the North Shore backwoods of Highland Park. “The ravines give some topography and the illusion of more space,” explains Bruce, a nonprofit adviser who spent more than a decade as a senior manager for The Nature Conservancy. They also allow for an ecosystem of fauna and flora that explode with color in the spring, and the Boyds wanted to spend their empty-nest years immersed in all that beauty. They hadn’t intended to build a house from scratch, but when another family’s deal fell through on this one-acre lot two blocks from where the Boyds had raised two children, they went to have a look. The brick house on the site had burned down, leaving a shell — and an unexpected opportunity.

Beth imagined gracious open spaces all on one floor to allow the couple to age in place; Bruce pictured a curtain of glass to frame the southerly ravine, along which he’d create a prairie-like yard that, ideally, would never require an irrigation system or need to be mowed or leaf-blown. And maybe, just maybe, he’d take up beekeeping. “We didn’t want a house that backed into the ravine,” says Bruce. “We wanted that landscape to be a component of the house.”

Architect Dan Wheeler of Chicago’s Wheeler Kearns spent weeks with the couple to understand how they lived and helped them settle on a relatively light footprint that would rest quietly on the property. It took 11 months to tear down the old house and design and build the new one. After considering six plans, the couple settled on a 3,850-square-foot main house wrapped in nine-foot-tall glass panes and black corrugated metal to contrast with the vibrant hues of the pastoral setting. “You’re always fighting against that Tudor mentality of getting a view from every room,” notes Wheeler. But there was no reason to resist in this case. “We wanted the architecture to be subservient to the landscape.” A decision-making breakthrough came when he persuaded the Boyds to separate the garage from the house. “So many of us drive in a heated car and go into a heated garage into a heated home,” he explains. “A detached garage would actually heighten their experience of the thing they love: nature.”

Optimizing space and light was a priority, so the master bedroom, living room, dining room, kitchen, and his-and-her offices are positioned on the edges of the house, while the mechanicals, powder room, and laundry are secreted away in a walnut core at the center. Two guest rooms are tucked behind sliding barn doors at the back. “Dan even hid the heat circulators and television,” Bruce says, “and he objected to recessing my Sonos speakers in the walls.” Chimes in Beth: “He called it ceiling acne!”

A partner at Wiley Designs, Beth chose the furnishings, of which there aren’t many that aren’t purely functional. The walnut dining table shares space with an open living room, and in the kitchen a Borghini quartz island offsets walnut cabinets. Much of the art on the walls throughout is Beth’s own, painted in her in-home studio.

Bruce’s domain is outside. He had pushed for orienting the house south so that he could plant gardens and native fruit bushes. The plants would eventually seed themselves, creating a kind of nursery that would allow him to continually curate the land, moving a maple sapling here, some bluestem grass there. The semiwild yard would never look, in his words, “too designed.”

He enlisted Ryan Kettelkamp of Evanston’s Kettelkamp & Kettelkamp Landscape Architecture to determine the grid of the yard. “It’s a harmony of Dan Wheeler’s glass box and the natural landscape,” Kettelkamp explains. He traced the sweeping curve of the ravine with prairie grasses and native plants, all of which hug a gravel terrace outlined by gabion baskets filled with rubble from the burned-down home. On that patio, a fire pit awaits Bruce’s March ritual of tapping the maples for about 100 gallons of sap, which he then boils down to three gallons or so of syrup. “My friends call it Nine-Iron Syrup, since I use a 9-iron to manage the fire while people hang out and drink with us,” he says.

After sap season, the property comes alive. Blue lobelia, cardinal flowers, and a sprinkling of echinacea carpet the yard, attracting an assortment of wildlife. “We just sit out front on the Adirondack chairs with two glasses of wine and watch the light change and the butterflies and hummingbirds swoop in,” Bruce says. “It’s really quite something.”