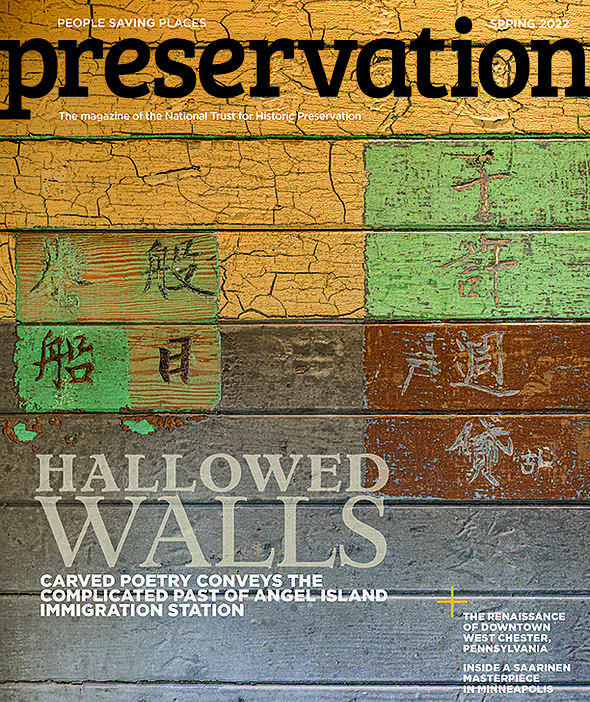 From our interview with Lydia Hankins and Ted Chung: View Link

Lydia: Our house is called the Battledeck House. It was built by the architect Henry Dubin for himself and his family in 1930. Dubin had gone with Mies van der Rohe to Germany, where he was exposed to the Bauhaus style. He came back to the United States with the idea of designing affordable, prefabricated housing, and he tested some of those methods on this house.

He meant it to be fireproof, so it’s all steel and brick, and he designed it in the International Style, with the flat roofs and ribbon windows he had seen in Germany. Its name refers to its battleship-like steel floors and roofs, which were prefabricated and lifted into place with a crane.

Since it’s an early example, it’s not a stereotypical stark, white Modernist building. The interior materials are organic, so it’s very warm in tone and feeling.

Ted: We bought the house in 2007. We had seen pictures of it online and we were sort of intrigued by the way it looked. No one was living there at the time, so we actually drove out to the house and peered inside. And just looking through the window and seeing the slate floors and wood paneling, we thought, “Oh, this is really interesting.” It was only a few weeks later that we bought the house.

Lydia: To be honest, though, we didn’t know what we were getting into. The house was being sold as-is, and we learned about the details of the historic landmark status only after we were under contract. But we were already in love with it.

And while it has required major repairs over the years, we’ve never wanted to change what we love about it, which is the modern architecture and the whole vibe and feeling of the design. We wouldn’t want to do anything to the house that the house wouldn’t want, and we’ve never found our taste at odds with what needed to be done.In fact, a previous owner had made some changes that we were very excited to undo. The daughter’s bedroom upstairs had been converted to a bathroom, with a big tub and mirrors on the ceiling. We didn’t turn it back into a bedroom, but we made it a calmer, more peaceful bathroom. The porch on the west side of the house had been expanded, and we restored that to its original design and enclosed it with sliding glass walls so we can use it in all four seasons.

Ted: Otherwise, the house was essentially unchanged. We’ve done quite a lot of work to repair and restore the exterior.

Lydia: We tend not to repair things until there’s a crisis—we didn’t fix the roof until it started to leak, or the foundation drain tile until there was water in the basement—but once we undertake a project, we always ask, “What would Henry Dubin want?” Our goal is preservation, rather than just maintenance. So we started with the roofs, then we did the drain tile, and then we worked our way up. We’ve had three or four big renovation campaigns over the years.

Ted: Our most recent project was restoring the exterior masonry and [fulfilling] Dubin’s intent for the finish, which we did with the help of our architect, Meg Kindelin of JLK Architects, and our general contractor, Jake Goldberg.

Lydia: The masons ground out most of the mortar joints, replaced all the damaged bricks, and replaced the rusted steel lintels over the windows and doors. A previous owner had removed the original railing at the roof deck, so Jake’s crew replicated that and installed new floor tile up there. We also removed some non-original gutters and downspouts, because there weren’t any gutters on the original house.

Dubin had used slate for the hoods over the front windows and the copings atop the roof parapets, and when those started to crumble, a previous owner covered them in metal flashing. We pulled off the flashing and replaced the slate with bluestone, which will last much longer. Meg is a preservation specialist, and she helped us choose the stone that we believe Dubin would have wanted if he couldn’t have slate.

One of the biggest jobs was hand scraping the paint off the whole exterior. When we bought the house, it was covered with yellow latex paint, which had trapped moisture and damaged the brick. It was also just the wrong color. Meg showed us an interview with Dubin’s son Arthur, who said that his father had intended to use whitewash—though he never got around to it—to show the texture of the Chicago common brick [made from local clay]. Jake found a company that does a special kind of stain that’s a very close match for whitewash.

Ted: As the owner of a historically significant house, your attitude has to be completely different than with a typical home. It’s more of a stewardship relationship. We’re committed to executing what’s best for the house, rather than trying to maximize its potential resale value. We’ve invested a lot to keep the house going, but we love it so much that it’s a no-brainer for us.

Lydia: When you live in a house designed by a skilled architect, you’re always noticing the perfect proportions, the flow, and the quality of light, and I think those things really affect your emotional state. In this house, we are just always aware of beauty.

There’s no wasted space; every room has its own charm, and every corner serves its purpose. We raised our two boys here, and we knew that it would be a living education in proportion, beauty, and thoughtful space. The boys grew up hearing us ooh and ahh over these architectural treasures, and as adults they really appreciate having grown up in this house.