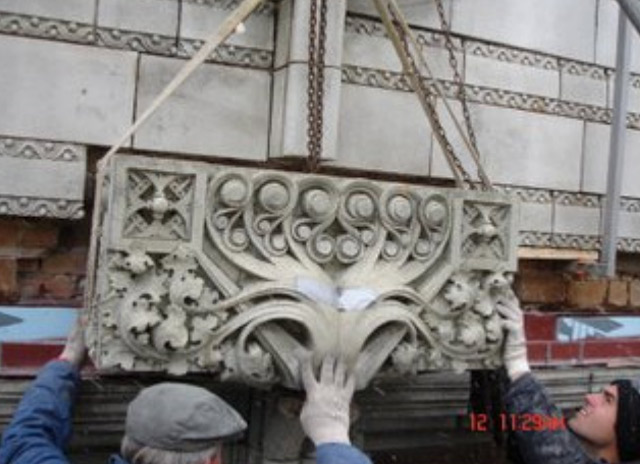 on North Lincoln Avenue in Chicago

I looked at it right before I left Chicago. Any time you can look at a Louis Sullivan, do.

An to hear Tim Samuelson tell an unforgettable story of Sullivan’s days as he designed it, click here.

The recent restoration has just received the 2007 Landmark Award for preservation excellence by the City of Chicago. And it will also receive the 2007 Richard H. Driehaus Foundation Preservation Award. Now owned by the nice and appreciative folks at Studio V Design, Krause was just added to the National Register of Historic Places.

Designed in 1922, the storefront was commissioned when Sullivan was elderly, living alone, in ill health and nearing the end of his life. His last work, this design was drawn when he was in the midst of writing his autobiography, and reflecting on his life and career. His initial depiction for the facade was on a cocktail napkin.

Painfully neglected in his later years, for 65 year old Sullivan it demonstrated the existence of a still vibrant talent. He cleverly designed a storefront with a recessed symmetrical entry that provided shelter, as well as, focused attention. The facade also showcased Sullivan’s enduring ability to depict intricate geometric designs and curvilinear plant forms in terra cotta.

The primary architect for the building was a former Sullivan draftsman. William Krause a successful music salesman who commissioned the building, committed suicide in the showroom/apartment in 1929. Shortly after Krause’s death the building became a funeral parlor, which it remained for more than six decades. Interestingly, the new owners held four separate ceremonies to spiritually cleanse the building, including using a feng shui master and a Hindu priest.