The year 2006 marked the 150th anniversary of Louis Henri Sullivan’s birth. Considered one of America’s most influential architects, much attention has been given to this brilliant designer. Frank Lloyd Wright, his former draftsman, often referred to Sullivan as his mentor and frequently called him “Lieber Meister,” beloved master. 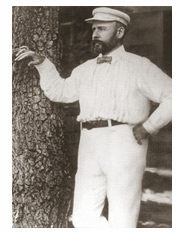 Constructed in 1922, the Krause Music Store was Sullivan’s last commission. Of the more than 180 buildings designed by Sullivan in his famous partnership with Dankmar Adler, only 50 remain today. He is considered a founder of modern architecture for his advocacy of honest designs, which represent their time, place and technology. A forward-looking designer his designs are noted for clearly anticipating the issues and solutions of Modernism. Sullivan, a prolific writer and speaker, is famous for the axiom, “Form ever follows function.” 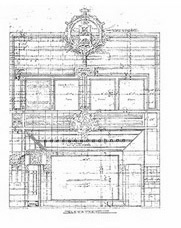 Studio V Design, the owners of the Krause Music Store, hired preservation architects McGuire Igleski & Associates to design the approach to the facade. GGC began the restoration with the removal of 25 feet of terra cotta above the second floor windows to expose the deteriorated underlying structural steel. The beams were sandblasted and reinforced with new steel and new welds. The terra cotta was reset, tuck-pointed and cleaned. Additionally, every joint in the terra cotta was meticulously ground out and re-pointed with new mortar. The original diamond shaped leaded glass windows were salvaged and restored with all new lead caming and copper weather stripping. The original black and white mosaic tile paving bearing the Krause name was restored to its original appearance. And finally, all blemishes on the terra cotta were decoratively repainted to match its original green hue.

A second architect was hired to adapt the commercial interior for use as the new home of Studio V Design. The noted architectural firm of Wheeler Kearns designed the result, a new office of modern design. In keeping with the modern aesthetic, extensive amounts of glass, steel and millwork were used throughout.

William P. Krause was a successful music salesman when he chose to build and desired a storefront worthy of attention. Itwas the first retail building on the block. A neighbor of his, architect William C. Presto, was hired for the project. It was Presto who recommended Sullivan to design its facade. A onetime draftsman for Sullivan, when designing the Farmer & Merchants Bank (1919), Presto reached out to his former boss. The project was to become Sullivan’s last.

By 1922, commissions had dried up for Sullivan’s designs. His buildings were no longer in vogue as taste changed in favor of the Beaux-Arts style of architecture. In ill health and living in a rented room, he began writing The Autobiography of an Idea, and working on a series of drawings. It was during this period of reflection on his life and career that Sullivan accepted the Krause commission. The design illustrated that he still possessed an astonishingly moving artistic talent. 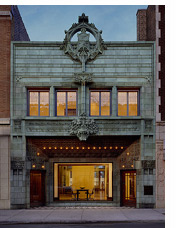 Sullivan designed a storefront with an inspired amount of detailed ornamentation. Symmetrical, the facade has two main entrances, one for an apartment and one for a store. The two entries and a large central window were set back from the sidewalk to provide a recessed shelter for pedestrians, while attracting attention to the display window. Sullivan also prominently featured a large lyrical symbol above the display window, which rises up through the second story and extends above the roofline.

In 1929 Krause died, and the property was initially rented and eventually sold to a funeral company. For the next six decades, the Krause building served as a funeral parlor and underwent much neglect and alteration to its windows, doors and façade. It was out of that altered past that the renovated building has emerged. Compelled to save Sullivan’s last great work, the Krause Music Store was meticulously restored to its rightful place as a national historic treasure.

The project has received a number of awards for its historic restoration and adaptive reuse. It has been honored by the American Institute of Architects with a Crombie Taylor Honor Award, Landmarks Illinois with a Richard H. Driehaus Foundation Award, the City of Chicago with a Landmarks Preservation Award, and the National Park Service added it to the National Register of Historic Places.