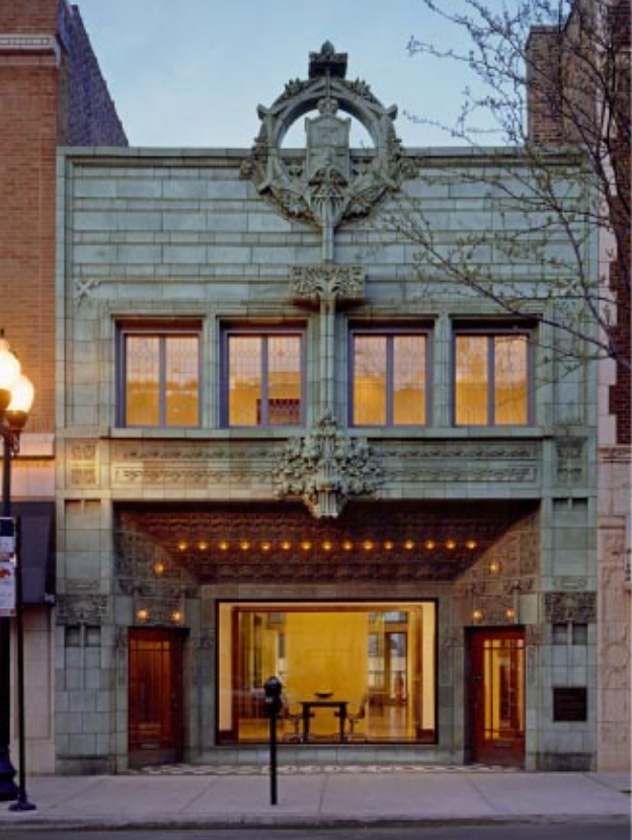 Things are looking up for the oeuvre of Louis Sullivan (1856-1924), the architect known as the father of modernism. After three of his buildings were destroyed last year, his last commission, the 1922 Krause Music Store in Chicago, was renovated this year.

The National Register-listed buildings terra cotta exterior was restored and its interior converted to offices; this month, workers are completing the landscaping portion of the project.

“Being the son of an architect, my dad always pointed out the Krause Music Store. I’ve known the building for years,” says Jacob Goldberg, president of Chicago-based Goldberg General Contracting, Inc., which completed the 16-month project this spring. “To get the opportunity and the responsibility to restore the facade and renovate the whole building was a really big deal for me.”

Goldberg started on the project last year, the 150th anniversary of Sullivan’s birth. Only about 50 of the 180 buildings Sullivan designed with Dankmar Adler survive today. (Hurricane Katrina damaged Sullivan’s summer home in Mississippi.)

The building, whose facade is protected because of its status as a Chicago landmark, was a museum until 2005, when Pooja and Peter Vukosavich “architecture buffs,” Goldberg says, bought it to renovate it as offices for their marketing communications company.

“Everyone in the neighborhood has some sort of connection to this building; they feel it’s theirs as well,” Peter Vukosavich says. “We really wanted to do it proper justice.”

Although the building is not open to the public anymore, the owners welcome onlookers.

“It’s very much a public building in the sense that it’s a storefront on a busy street, “Vukosavich says. “It’s a private office, but much of the beauty of the building is the facade. They’re able to enjoy the Louis Sullivan history from the outside.”